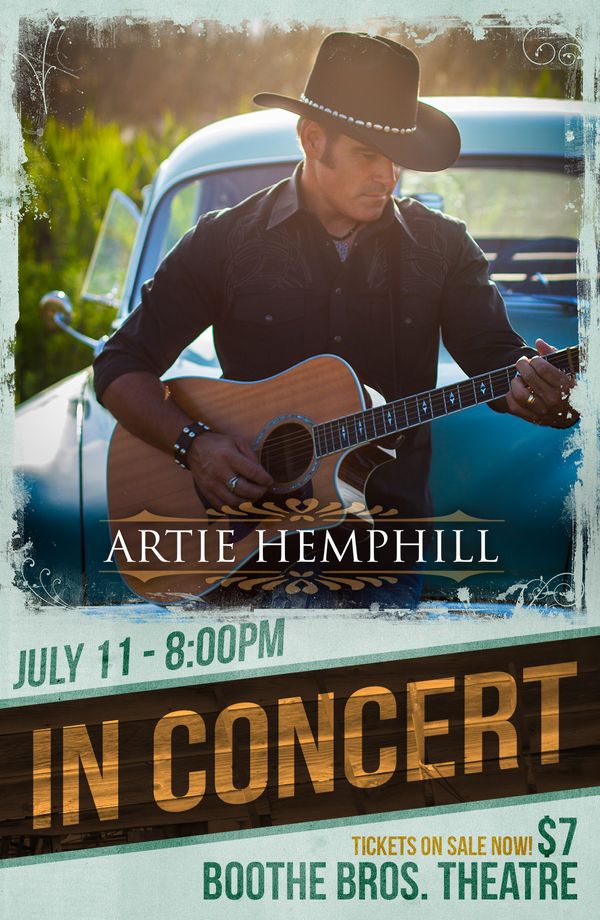 With the great news that our CD “Country Soul” is officially finished, we are now looking forward to our highly anticipated CD Release Concert!

Seating is limited so you will want to purchase your tickets in advance at any of these three locations:

We look forward to sharing our new music with you!

Today, Artie Hemphill and the Iron Horse Band released the first video in a series of live music videos.  This first video, "God Gave Me You," was orginally performed by Dave Barnes then released by Blake Shelton becoming a smash hit, topping the Billboard country charts at number 1 for several weeks.

This new series was designed to showcase the band's abilities in a live recording environment.  This first song is a cover, but the series will include mostly new originals from here on out.  New videos will be released monthly for your viewing and listening pleasure.

It was a little tough getting all the photos and video together from this event, but it's still worth posting, so here you go.  And the winner is….. 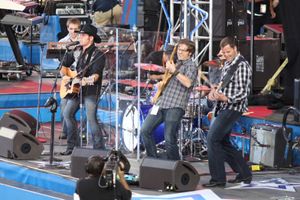 Artie Hemphill and the Iron Horse Band came away with the big win July 2, 2011 with over 47,000 people watching and cheering!

In February, Stadium of Fire talent searchers called out for talented groups and individuals to submit samples of their talent on You Tube. Over 400 contestants applied. A panel narrowed the videos down to 40. The videos were posted on the web for the public to “view and vote” for their favorite performers and narrow the group down to the top 25. At the end of March, Artie Hemphill and the Iron Horse Band were thrilled to find out they had made it into the next round!

On May 13th, the top 25 contestants competed in a grand concert in front of a live audience and a panel of judges. The judges included Sam Schultz, David Osmond, and Kendra Lowe. That night AHIHB performed their original song “Country Soul” which brought the crowd to their feet! That night, their names were called as one of the top 10 finalists to continue the next night in another elimination round.

On May 14th, Artie Hemphill and the Iron Horse Band performed again in another live performance with the same panel of high-profile judges. There they battled it out with 9 other performers to claim one of three coveted spots to perform at the Stadium of Fire. They were the last to perform that night and brought the house down with their hard-core signature arrangement of the classic Merle Haggard tune “Workin Man Blues”. The excitement of the evening continued when Artie Hemphill and the Iron Horse band won one of three slots to perform in the last leg of the competition July 2nd at the Stadium of Fire. 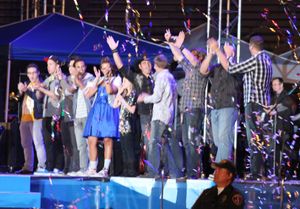 The night of July 2, 2011 finally arrived and the Stadium of Fire program was kicked off with skydivers, choirs singing, military jet fly-overs, a field full of dancers and David Archuleta singing the National Anthem. Next on the program was the talent contest. The three performers were each placed on their own stage and one by one took the spotlight. Artie Hemphill and the Iron Horse Band were slated to perform last in front of a crowd of over 47,000 people. The air was thick with excitement; AHIHB took the stage and gave a performance of a lifetime. Their musicianship: mind-blowing, their stage presence: electric, Artie’s vocals: passionate!

The final judging was to be done by text-voting there at the stadium. When the mass texting over-loaded the system the old-fashioned method of cheering and measuring it on a decibel reader was put into place.

Emcee Stephen Jones and Stadium of Fire host, Chad Lewis invited the three finalists up on stage and asked the audience to take turns cheering for the contestant they had text-voted for. The stadium cheering was then measured as each contestant was singled out. Last, the crowd was asked to cheer for Artie Hemphill and the Iron Horse Band. The cheering, stomping, screaming, and whistling from the stadium filled with over 47,000 people was overwhelming!

And…Artie Hemphill and the Iron Horse Band were named WINNER of the First Annual Stadium of Fire Talent Contest and were awarded $10,000 prize money!

AHIHB want to thank all the friends, family, neighbors, co-workers and fans who voted, attended, cheered and supported all throughout the contest! Thank you!

This event was so thrilling to have been a part of. Artie and the band are grateful for the all those involved and their efforts to put on such a professional show. Thank you Stadium of Fire!